Earn Thousands from Building a Data Center: Here’s How

What Is a Data Center?

A data center is a physical location for the storage, management, and dissemination of data. Data centers contain all kinds of servers and equipment used to process information generated by individuals and enterprises via PCs, cell phones, tablets, video streaming service providers such as Netflix or Hulu, social media platforms such as Facebook or Twitter, online retailers such as Amazon, etc.

How Does a Data Center Work?

A data center operates in a manner similar to an office building. Servers, storage systems, and networking equipment are installed in the data center’s server room or wiring closets. The servers run programs that allow individuals from any location to access services such as email, public webpages, Intranet sites, and file-sharing services.

The data center is connected to the outside world via a wide area network (WAN), such as the Internet, and/or a service provider’s managed or co-location services, such as those provided by hosting companies.

Typically, data centers have redundant server room UPS systems. If one electrical power source fails, there is another to take its place. Data centers are equipped with both primary and backup generators in the event that commercial power fails.

The servers themselves may also include redundant components, such as multiple power supplies, hard drives, network adapters, etc., to ensure if one of these components fails, the system doesn’t stop operating.

How to Design and Build a Data Center 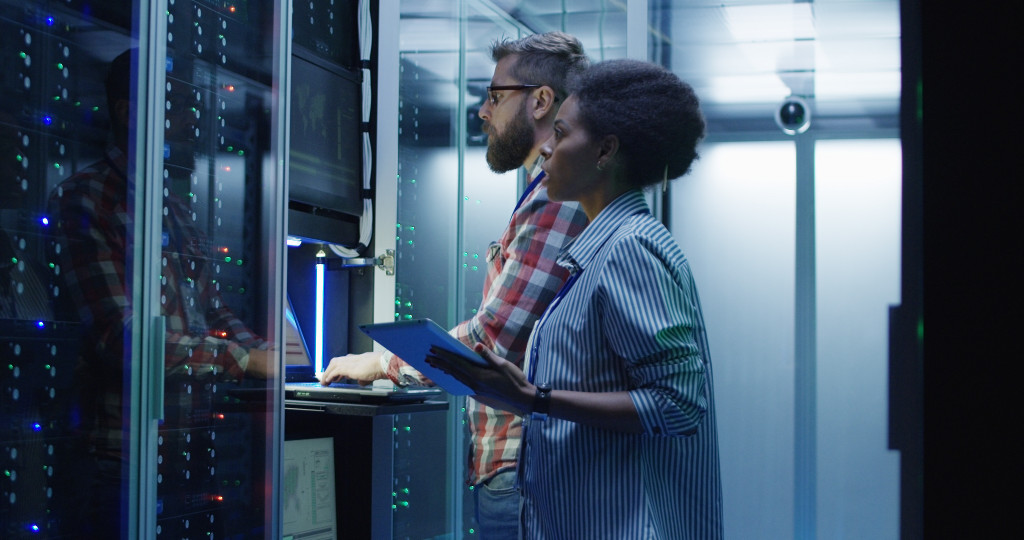 A data center is typically divided into two major sections: the mechanical or electrical room and the “cage” or customer area. The former, where the server equipment is stored, requires high security to protect expensive servers from intruders.

It has raised floors to route cables among machines and make them accessible for servicing. Underfloor air-conditioning keeps equipment running in the high-heat environment generated by servers. Server rooms also have backup generators in case of power failure.

There are multiple cages where customers use their own racks to store servers. Cage locations are generally based on proximity to major transit routes for data backbones, with redundant connections to multiple telecom providers or Internet service providers (ISPs).

Cages are usually located behind locked doors to provide limited access. The customer area may also have its own power supply, fire suppression system, raised flooring, and air-conditioning.

Data centers are democratic in that anyone can rent space to build their data center, even individuals or small businesses. However, the physical building where the equipment is housed must comply with numerous operational and environmental specifications, in addition to fire protection systems. These include redundant power sources (both utility grid power feed and generator), HVAC (heating, ventilation, and air conditioning), climate-control systems such as free cooling or liquid cooling, various forms of infrastructure protection such as fencing and bollards to prevent vehicular access, etc.

Location of a Data Center

While data centers are generally built in major metropolitan markets with large populations of technology-dependent users, their proximity to these clients is not necessarily the primary reason for selecting a location. Other factors are more important when establishing a presence within any market, including access to reliable power and fiber optic cabling infrastructure.

Data centers are critical to the operation of the Internet. They enable businesses to gain access to remote users, store and manage their data, and cut down on communication costs between geographically dispersed employees or customers. All these make the cost of building one worth it.